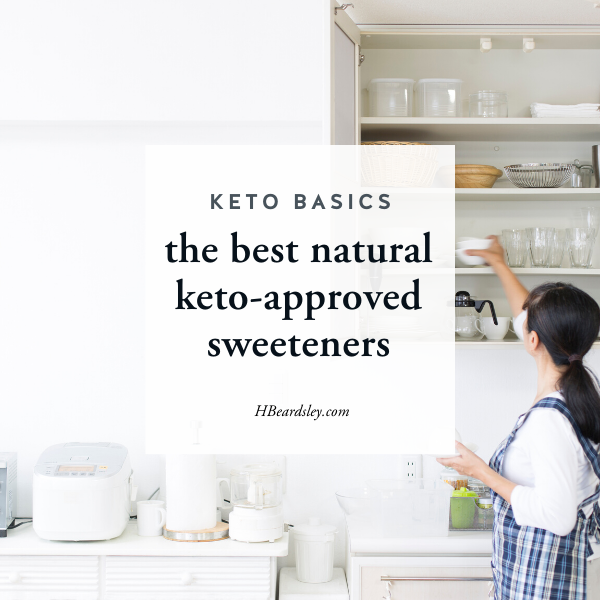 Thankfully, there are a number of natural sweeteners that do not affect blood sugar & insulin (or have a minimal impact) that allow me to enjoy sweet treats while also helping my body to heal my insulin resistance. In the eight months I’ve been eating low carb and using low carb sweeteners, I have reduced my average fasting blood sugars from 135-145 to about 110. Using these natural keto-approved sweeteners has been a big part of that success.

Click the hyperlinks to shop as you read or scroll down for all of the recommended items in one place.

Stevia comes from the leaf of the Stevia plant, so it’s as natural as it gets! It’s available in powdered or liquid form. Studies have shown that stevia not only does not raise blood sugar but that it can minimize spikes in blood glucose and insulin levels after eating. Some people complain that Stevia has a bad aftertaste, but I find that that varies by manufacturer, so if you don’t like a certain brand of Stevia, I encourage you to try another one!

Because Stevia is many times more naturally sweet than table sugar know that any type of powdered Stevia that is formulated to measure ‘cup for cup like sugar’ means that it has artificial fillers like maltodextrin (which spikes blood sugar) or even regular table sugar added to it which pretty much defeats the purpose of using Stevia in the first place.

Erythritol is one of many types of sugar alcohol. Sugar alcohols provide about a half to one-third fewer calories than regular sugar. Sugar alcohols are converted to glucose more slowly, require little or no insulin to be metabolized and don’t cause sudden increases in blood sugar.

Erythritol is the darling of all sugar alcohols because it commonly found in fruits like pears, grapes, melons, mushrooms, soy sauce, and cheese so our bodies recognize it. Studies on Erythritol in humans show that it does NOT cause digestive distress (1) like other sugar alcohols can, and has been proven to be very safe for human consumption. Double-blind, randomized control trial studies confirm that irrespective of sweetness level, the consumption of erythritol does not significantly raise blood glucose or insulin levels after eating.(2) Erythritol is not metabolized after it’s absorbed, so the vast majority (about 90 percent) is excreted in the urine.

Beware that most available Erythritol is made using corn sourced from China. Because corn is one of the most genetically modified foods, I only buy Erythritol that is made from cane fermentation here in the U.S. I feel better about the accountability of American food manufacturing rather than that happening overseas, but that’s me. I just encourage you to read labels, go to manufacturer’s website and find out specifically how their product is made and decide for yourself if you’re good with it.

Also note that Erythritol can have what’s called a ‘cooling effect’ aftertaste, similar to cooling feeling after eating mint. One way to counter this is to combine erythritol with powdered stevia, which you can do yourself to save money. The erythritol will counter the slightly bitter aftertaste of the stevia and the stevia will decrease the cooling effect of the erythritol, resulting in a combination that’s the best of both options.

Monk fruit is also called Luo Han Guo and is a fruit native to China.  The sweetness of Monk Fruit is due to its antioxidant compounds called mogrosides which can vary in their level of sweetness. Mogrosides are metabolized differently by the body than natural sugars. That’s why, despite their very sweet taste, these fruits contain no calories and have no effect on blood sugar.

Quick explanations for those who want more information about why I don’t use other types of sweeteners.

Other sugar alcohols like sorbitol, lactitol, maltitol, mannitol, and xylitol can be chemically manufactured and sometimes uses hydrogenation which is a completely unnatural way to manufacture food for human consumption. In addition to being artificially created, these sugar alcohols come with nasty side effects like bloating and gastrointestinal distress because they are not absorbed as quickly as Erythritol and tend to react badly in the intestine. Please also note that xylitol is toxic to dogs because they do not metabolize it the way humans do. (4) Do not ever give your dog or cat anything sweetened with xylitol. I avoid these types of sugar alcohols for all these reasons.

I think we all know that there are artificial sweeteners like Aspartame (Equal, NutraSweet), Saccharin (Sweet ‘N Low, Sweet Twin), Xylitol, Sorbitol, & Sucralose (Splenda) that don’t affect blood sugar BUT they have terrible side effects and can actually make insulin resistance, blood sugar disorders, and other metabolic conditions worse.(5) I avoid artificial sweeteners at all costs and have had to change my brand of chewing gum, toothpaste, and sports drinks that my kids drink in order to avoid them – which reminds me to write a post about that, too.

I avoid artificial sweeteners at all costs and have had to change my brand of chewing gum, toothpaste, and sports drinks that my kids drink to avoid them.