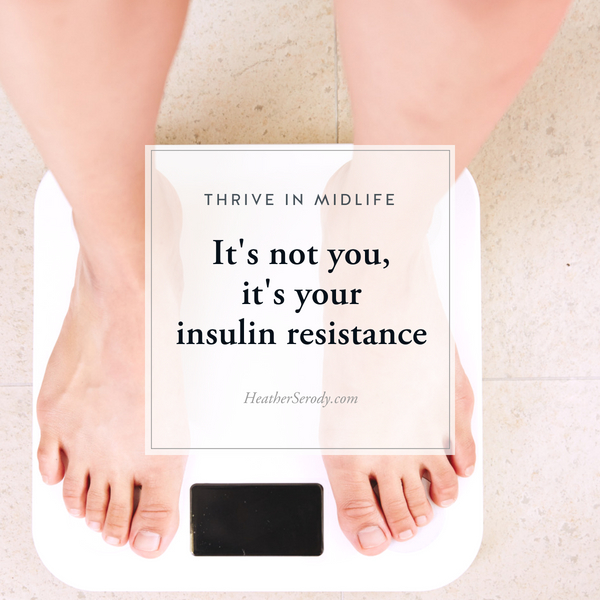 I listened to the Dear Sugar podcast called Trust Your Body the other day. It was an interesting & supportive discussion about women’s struggle for body acceptance.  The letter writer in this podcast is exactly like hundreds of thousands of women and men in midlife who are JUST COMPLETELY exhausted by trying to control their weight despite following conventional advice about how to lose. It’s no wonder that these podcasts and the support they bring are necessary and helpful since so many of us have tried everything to lose weight and it feels not only impossible but as though the things that work for thin people just don’t work for us. We don’t trust our bodies, we work harder than thin people at weight control, exercise, and often wind up exasperated at best, and at worst depressed and shamed at why we can’t control or maintain a weight that feels healthy and natural.

Well, guess what? If you are prone to blood sugar sensitivity, no conventional advice about how to lose weight or eat WILL EVER work for you because physiologically you are made differently.

According to Dr. Mark Hyman*;

…these blood sugar spectrum disorders affects 1 in 2 Americans and is the leading cause of most chronic disease in this country, including type 2 diabetes, heart disease, stroke, dementia, and cancer, not to mention its leading role in weight gain and obesity. Despite this fact, there are no national recommendations from the government or key organizations to advise screening and treatment of it, and most doctors don’t know how to properly diagnose it. The result is that 90 percent of the people who suffer…are left undiagnosed and untreated.”

With this in mind, I agree that we need body acceptance in all cases, no matter what our weight is, but I also believe that most men and women who struggle with being overweight HAVE NO IDEA that they even suffer from subclinical blood sugar disorders which are the root cause of weight gain. If the insulin resistant could recognize their condition and understand that blood sugar spectrum disorders can be reversed with a change of diet we could revolutionize the health of our nation. Doctors like Jason Fung have proven that a low-carb approach to eating and intermittent & long term fasting can reverse the progression of diabetes, insulin resistance, obesity, and other blood sugar spectrum disorders.

So, this is why I think it’s more important than ever to talk about insulin resistance in order to empower those affected to understand how to heal their bodies. We need to know what exactly insulin resistance is, how to recognize it, and what to do about it. It’s important because the way western medicine handles slightly elevated blood sugars (the classic symptom of impending insulin resistance and stubborn weight gain) is to tell you to wait until they go high enough to qualify you for a type 2 diabetes diagnosis. It’s insane.

This is what happened to me. Back in 2016, my fasting blood sugars were regularly 130-145. I took matters into my own hands, self-diagnosed myself with insulin resistance and figured out how to heal my body by eating a low carb diet and practicing fasting.

what is insulin resistance?

Here’s a simplified explanation of this complex system:

This is why high blood sugar causes insulin to store fat.

But that’s not all.

This makes sense because if your body has determined that it already has an excess of readily available blood sugar in the bloodstream to be used for fuel then there is no need to dip into fat reserves.

the signs of insulin resistance

While researching my symptoms, I identified insulin resistance as an explanation for my inability to lose weight based on these symptoms:

It’s helpful to remember that our bodies have survived over millions of years because of its ability to save excess fuel as fat and then lock it away to be utilized as fuel during times of famine.

So when you eat in a way that causes excess blood sugar/insulin you are signaling your body to not only get fatter but to also lock your fat reserves against being used as fuel.

“About twenty five percent of the population appears to be genetically resistant to the adverse effect of overproduction of insulin and insulin resistance. These individuals usually manage to stay very slim, no matter what they eat. But 75% of the population is not so lucky, especially during perimenopause.”

I guess when you think about it that way, those skinny people’s ancestors are really lucky to have survived famine with little fat on their bodies. That’s probably why there’s so few of them in the world. They are an evolutionary anomaly.

Clearly, I’m not one of the lucky ones as far as that goes. I inherited genetic coding from ancestors who were genetically proficient at converting excess blood sugar to fat and then locking it away for future survival needs.

Right now, I’d survive a nice long time on my fat reserves, which would be great if we happened to be hit with a zombie apocalypse because I’d outlive those naturally skinny people for sure. But, fortunately(?), it’s not the zombie apocalypse, so I’ve got to figure this imbalance out.

When you have excess insulin in your blood it blocks the hormone leptin from working properly.

This is a big problem because leptin is the hormone that tells your brain that you are full.

Leptin is released from fat cells. It makes sense right? If you have plenty of fat reserves on your body you shouldn’t be overly hungry because your body knows there is plenty of fuel on board.

The problem is that excess insulin blocks the brain from receiving the signal from leptin. The brain never gets the message that you are full.

the key is to lower insulin

You want to lower insulin in order to allow leptin to deliver its signal to the brain that you are full. When this happens you will genuinely not feel hungry.

That is a beautiful thing.

You want to lower insulin so that you stop storing excess blood sugar as fat.

You want to lower insulin so that your fat cells will open the door to be used as fuel.

You want your body to be able to dine on your own fat.

And not be hungry.

how to lower insulin

The good news is that we can regulate insulin by controlling the types and quantity of food that we eat.

could you be insulin resistant?

I knew I had insulin resistance because the following traits apply to me; which are ALL signs of unstable blood sugar:

More signs of insulin resistance are feeling tired, lethargic, and still craving something sweet even after a healthy meal. Also, there is that pesky reality that our body chemistry changes as we get older. Seventy-five percent of us lose the ability to process carbohydrates without gaining weight over time. This isn’t news, people. We all know we can’t eat what we used to be able to. If that is you, you could have insulin resistance.

Armed with this new information, you can now see things differently and you just might begin to trust your body again, once you identify that you are sensitive to blood sugar instability. You now understand WHY your friend can eat whatever she wants and stay slim: she’s insulin sensitive and her weight will likely stay the same throughout her life.

The world just makes more sense when we stop expecting to get the same results from bodies that evolved, work differently, and handle blood sugar differently. The body is just an evolutionary machine that is designed to survive in the most efficient way possible based on its genetic coding.

If you want to reverse insulin resistance you’ll have to override your body’s evolutionary impulses to dine on glucose instead of your own fat by changing what and how often you eat. To learn how, visit the next post in this series below.

You CAN create the life you always wanted.